A few weeks ago I began to notice something strange on my right big toe nail. I initially didn’t think much about it, tried to rub it off. No dice. Haven’t been paying too much attention to it since but began looking into what may be going on online. Toenail fungus. Very common, but hard to get rid of. However, as I looked further and typed in different remedies, I searched for rubbing alcohol and lo and behold, there were reports of success.

So yesterday I started applying alcohol to the nail, not much of any improvement I could see, but I kept at. Then just a little while ago, I also started applying alcohol more to the front of the nail, trying to get the alcohol under the nail. Wow! Within seconds I began to see a marked change. Seems to be working! I then cut the nail back as much as possible and went at it again. Hopefully this will do the trick. Certainly already looks better!

Update 6/13
Well, the alcohol certainly has not made it worse, but I also can’t say it’s improved the situation as much as I had initially thought. I was encouraged by what I saw, but that was in response to a temporary effect of applying the alcohol and the nail becoming wet and looking better. Once it dries, the fungus is still there.

However, this is early days in treatment and I’ll continue to use the alcohol. I’ve also started to expose the toe to sunlight for several minutes every day. Also, walking around barefoot whenever possible and have a pair of open-toe sandals on the way.

Hopefully, a consistent regimen will eventually win out, but I’m resigned to this taking many months because of the glacially slow growth rate of toenail.

Update 9/14
And it’s gone!
I *think* not wearing socks whenever possible and just time (4 months) for the nail to grow out is the reason. 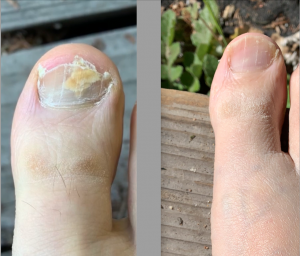