(from Chuck Sher)
Our friend and colleague, the great Mark Levine, passed away on Thursday, January 27, 2022 at the age of 83. May he rest in Peace and may all the thousands of people whose lives have been uplifted by his music and his unparalleled books say a word of thanks to this Giant of Jazz as he enters the Big Band in the Sky. We’ll miss him… 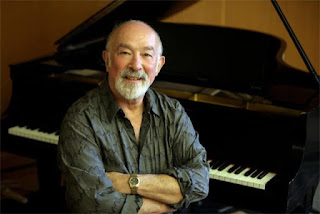 Tip: If you have a custom sitemap.xml file, turn off RapidWeaver’s generator or it will overwrite it.

John Connally
And I know of course that some now speculate that well, it was me that the man was after, not him. Of course I had been campaigning all over Texas all last year for eleven months, all this year riding in parades, horseback, in cars, open cars, on street corners. I could have been an easy prey for anyone, with no security whatever, so I don’t place any stand on this except I think the man did what he intended to do, shoot both of us. And that’s the only thing I can think.

Forrest Sawyer (00:00)
Governor Connally, how about it? Do you think you might have been the target?

John Connally (00:03)
Well, no one knows what was in the mind of Lee Harvey Oswald. I would say there are two two things that would mitigate against it, certainly. First, Oswald certainly had no way of being sure that I was even going to be in the car with President Kennedy. That’s number one. Secondly, if he really wanted to kill me, he could have done it 100 times in 100 different places all over Texas. I was speaking all over the state at the time, basically unprotected. It could have been done in a much much easier fashion and probably in a way that he would never have been apprehended. So I think all the logic would dictate otherwise. In any event, I think if I was a target, I was probably a secondary target. The man fired three shots. He hit three times. He hit President Kennedy twice, and me once. So I have to assume that at the worst or the best, however you view it, he hit precisely the individuals he was shooting at.

Forrest Sawyer (01:07)
Well, you say three times. The Warren Commission actually said there were two bullets. You have said in the past you thought there were three bullets. Do you think there might have been somebody else there shooting as no.

The motorcade route had been well publicized. A map of it was even on the front page of The Dallas Morning News the day of the assassination (11/22/63):

Connally’s dismissal that “Oswald certainly had no way of being sure that I was even going to be in the car with President Kennedy” doesn’t negate that there were several other open cars in the motorcade. Oswald could simply have been waiting and watching the vehicles until he recognized Connally riding with JFK, “Oh, there he is!” 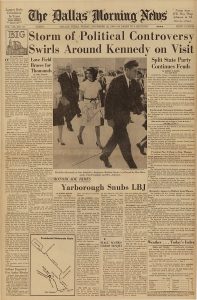 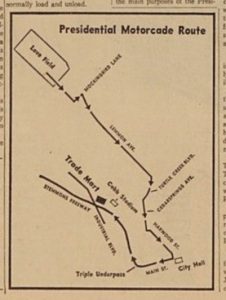 Malcolm Kilduff (00:02)
That was true. But then you turn around and you take a look at it and you find that Lee Harvey Oswald was really not associated with any of those movements on civil rights, and he wasn’t associated with…

Malcolm Kilduff (00:15)
In my opinion, he never meant to kill Kennedy. Lee Harvey Oswald had been in the Marine Corps, had been discharged under less than honorable circumstances because of his… he went AWOL to Russia, where he met Marina. He married Marina, then came back and he was dishonorably discharged from the Marine Corps, and who signed off on his general court martial papers but the Secretary of the Navy. And who was the Secretary of the Navy? John Connolly.

Tomorrow night I’m going to see if I can figure out where the water is coming into the trunk of my car. I plan to take a battery powered camping light and place it into the trunk – wherever I see light escaping, that’s what I’ll shore up.

Invariably I come back to the problem of maintaining a static website without using a fully featured generator, but one of my own. Each new page poses logistics of integration, something that a generator for the most part takes care of. It’s possible I could import the majority of the site into WordPress, but that poses other complications. Using RapidWeaver looks like the logical choice because I can maintain the current site structure, but RW lacks an importer, so a lot of time just copying and pasting over pages, not something I want to do. The limbo continues.

Had a dream of seeing a pair of juvenile lions running (in a friendly way) towards our car. The hills were golden brown, like in summertime, and the lions were coming downwards to us.