Been munching away on another bag of Newman’s Own “Spelt Pretzels” – I think they’re about as good a pretzel from a bag as I’ve ever tried and if they sold them at the movies, I’d buy them instead of popcorn! 🙂

I just discovered that there’s a Flutemakers Guild alto flute for sale at Flute Center in New York. These are very rare – only thirty made. Here’s the ad (scroll down):
http://www.flutes4sale.com/used.html

I had dinner with my friends Dean and Sari in Sausalito last night and while looking at the menu I commented at how I couldn’t read it that well. Dean promptly pulled out a pair of reading glasses and handed them to me to try – voila, MUCH better. So this morning, I went out and bought a couple of pairs of Dr. Dean Edels’ reading glasses. Things are pretty blurry if I look at anything other than a foot away, but within that range, words are sharp once again (guess that’s why they call them ‘reading glasses’…). Thanks Dean and Sari!

Yahoo! has recently launched a suggestion board for some of their services (Yahoo! Mail is curiously not one of them), including Upcoming.org. I’m hoping that my suggestion regarding putting more info into the badges will actually help:
http://suggestions.yahoo.com/detail/?prop=upcoming&fid=7533

I remember reading a long time ago (in what I thought was John Steinbeck’s “The Grapes of Wrath”) the following:

“If you want to drive your head into a pile of broken glass, ain’t nobody can tell you different.”

I’ve looked for this quote but can’t find it in “The Grapes of Wrath” or anywhere else for that matter. Anybody know where it’s from?

Joad grinned. “No, I ain’t. If you wanta drive your head into a pile a broken glass, there ain’t nobody can tell you different. You know this here preacher, don’t you, Muley? Rev. Casy.”

A couple of days ago (before calling them), I filled out the contact form to FileMaker asking about IN CONTROL. I wrote:

To Whom It May Concern:

What steps need to be taken to have IN CONTROL 3.5 updated and re-released? I’m still using IN CONTROL (in OS9 because) I haven’t found anything in OSX that works as well.

Today, I got my reply:

Thank you for your inquiry. In Control 3.5 is not affiliated with the FileMaker brand names. Please use the link that was provided to find information with regards to your questions.

Needless to say, I have replied to Jae’ Deshields asking them to confirm their facts.

There may be hope after all! The outliner Opal seems to be on the right track.
http://a-sharp.com/opal/

What is most encouraging, is that David Dunham (Opal’s software designer), has already sent me two emails regarding his product and as a bonus – owns IN CONTROL too, so he knows what I’m talking about! I’m hoping David adds columns soon as they’re absence makes Opal difficult to want to use. Ideally, I hope over time he can incorporate the best features of IN CONTROL into Opal. If he does, I’m confident he’ll have a great product.

I just got back from seeing Sir James Galway perform with the Napa Valley Symphony – it was a great concert! I actually found out about the concert thanks to a friend emailing me about it on Thursday, otherwise I’m pretty sure I’d have missed it. On Sunday, I left around 1:00pm to get over to Yountville by 2:30pm to buy a ticket. Much to my surprise, when I got to the Lincoln Theater the concert was sold out! I hung around the Will Call window and got lucky – a woman came up holding tickets. I asked her if she was selling tickets, and she said no – and promptly gave me one! 🙂

The concert started off with the Beethoven 2nd Symphony. This was a reversal in the program order as the Beethoven was supposed to be in the second half, the Galways in the first. Anyhow, I was surprised to hear the majority of the people clapping after every movement! Usually at a classical concert here in the USA a few people might clap between movements – but this was different.

After the intermission, Sir James took the stage and played the Mozart D Major flute concerto. He sure gets a nice fat low register and though initially I had a hard time hearing him cut over the orchestra (I was near the back of the hall), within a few minutes a good balance between him and the orchestra emerged. The 1st movement cadenza was played well, and it was refreshing to really hear Sir James get a chance to show off his still quite formidable flute playing. The second movement cadenza I didn’t get, it seemed pretty mindless really (no reflection on Sir James as he didn’t write the thing). The third movement zipped right along. All in all, a nice version of the concerto.

Sir James then left the stage and returned shortly thereafter with his wife to play the Cimarosa. Can’t say that piece does anything for me, sorry. Would have much rather heard them play the scherzo from the Mendelssohn ‘A Midsummer Night’s Dream’

Several encores followed the Cimarosa. They played an arrangement of the Mozart ‘Turkish March’ and then Sir James played Brian Boru’s March, Danny Boy, and the fastest version of Bach’s Badinerie I’d ever heard him do (too fast, to be honest).

I stuck around after the end of the concert in the lobby and got in line with all the others to get CDs signed by the Galways, or just say hello (which is what I did).

Catch him if you can.
http://www.napavalleysymphony.org/singleconcert_concerts.html&id=73

I just got off the phone with FileMaker. Looks like in 1998 FileMaker ended all development of the Claris product line, which I guess IN CONTROL was then unfortunately a part of. Too bad – IN CONTROL was a great product and with much potential (especially these days!). The World (or at least my world) could really use a product like IN CONTROL brought up to date. At least the OS9 program still works and so as long as I have this computer, I can continue using it in all it’s twelve year old glory – which ain’t much. Perhaps someday a programmer will whip something together for us IN CONTROL die hards to use in OSX or better yet, online. How difficult could it be? 😉

I have an old Mac OS9 program (circa 1991-1995) called IN CONTROL that was made by the Attain Corporation and written by Robert Alpert, Dan Chadwick and Steve Troppoli. This is a great organizer program which I still use because it works so well. Unfortunately, IN CONTROL never made it to an OSX version and I believe 3.5 may have been the sunset release. It’s also my understanding that IN CONTROL is currently the property of FileMaker Inc. which – for whatever the reasons – decided to no longer continue it’s development. A couple of reviews of IN CONTROL from 1993 and 1994 can be found at:
http://www.tidbits.com/tb-issues/TidBITS-191.html#lnk5
http://db.tidbits.com/article/01826 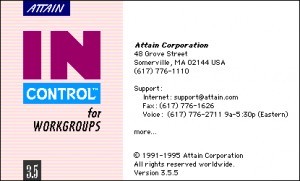 The closest thing I’ve seen to IN CONTROL is OmniOutliner. A lot of the “look” of OmniOutliner is very much like IN CONTROL, though I don’t feel it’s the same intuitive experience – or more likely, I’m simply not as familiar with OmniOutliner and so I prefer sticking with what I know.

Like IN CONTROL, OmniOutliner is still a desktop based program. Given my preference to Web based applications (Yahoo! Mail, Google Docs etc.) I find having something like OmniOutliner tied down to my home machine very limiting. What I’d really like to have is access to something like an online IN CONTROL program. Anybody know of anything?