After storing the Husqvarna 5521RS mower with the gas tank all but empty over the winter, I went to fire it up yesterday. No dice. On a whim, I gave it another pull this morning and it started right up. It’s a seven year old machine, but still great at keeping down the weeds. I think this winter, I’ll just start it up every week or two and let it run for a few minutes. 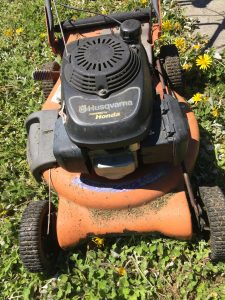 So tore everything back out and started over. Removing the breather hose from the engine was a struggle. Once I got the hose free I noticed some gunk on the end (like caulk), as if whomever installed it more or less glued it in. I attached the hose to the air filter case and started over. I got the carburetor installed and then tried to reattach the hose to the engine, no go. So I then cut about an eighth of an inch off the end of engine end of the tube and rubbed some motor oil over and in both ends of the tube. After several failed attempts, somehow I got it attached. Yay. 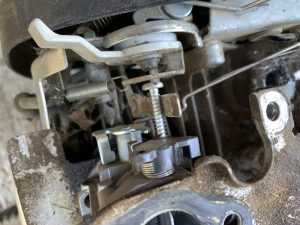 Carburetor with screw put in to the small hole on the black plastic piece to make compatible with auto-choke, works great! 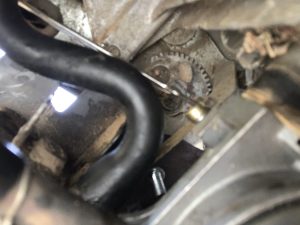 A PDF of the Honda manual from 2007 has a detailed breakdown of the carburetor installation process.
Honda GCV 160 Carburetor Install