Ain’t it the truth

Error sending email to example@example.com  You must provide at least one recipient email address.

One email address was failing, turns out it had a trailing space after .com
Not sure why phpList didn’t automatically remove the trailing space on import, but that was the reason.

This has happened before and baffled me as to why the fail because visually in Search subscribers the emails look fine and don’t show that there’s a space at the end. Would be great if that were different, for example if in the email report, instead of
[Mon 23 Jan 2023 12:24] [CL] 1 failed (will retry later) it actually showed the failing email
[Mon 23 Jan 2023 12:24] [CL] 1 failed: example@example.com (will retry later)

Having to sleuth it out by going into phpMyAdmin, opening the eventlog table and reverse sorting by ID to find the culprit is a drag, but unfortunately, that’s the way it is.

So much for the posts of “friends” in my feed – they’ve largely disappeared, replaced by one sponsored ad after another, oh well, it was great while it lasted.

My modem locked up and killed Wi-Fi during a recent storm. Unfortunately, I was unable to restart it because I was out of town so got me thinking about how to prevent the same thing from happening again the next time.

Was hoping for a power outage to force a restart when power resumed, but that didn’t happen. So now I’m exploring options other than asking a neighbor to go to the circuit breaker on the house to do it.  PG&E can do it, but that involves many more steps and scheduling a crew to come over etc. – not practical. You can’t just say, “Please turn off the power for five minutes so my modem can reboot”  (hopefully a mechanical timer can do just that).

The old pin style Intermatic TIME-ALL timer I have has a minimum duration of 30 minutes between On/Off. That’s longer than I’d like, so looking into a replacement with shorter intervals. 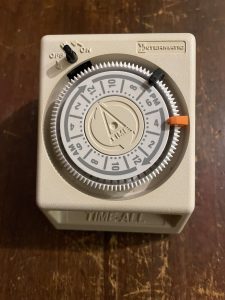 Somebody else had the same idea!

Works for reset once a week

Reviewed in the United States 🇺🇸 on December 23, 2022
Style: 1 Pack
I needed to reset my WiFi router once a week since it was disconnecting when I waa away for weeks. This works well for it. There may be other ways of doing it but this is the way I did it. I set it program 1 to turn on the router every day of the week at one time say 4:00 AM. I then set the same program to turn off 5 minutes before the time only one day. For the example Sunday at 3:55 AM. Hope that helps someone.

I went with this

I had no idea until last night when I saw this video https://youtu.be/1hHfoB4mSrQ what ChatGPT was about. After replaying the video several times, I signed up to see for myself.  It’s amazing just how good this thing is (though I’m not sure about the author’s five year timeline putting the careers of programmers, math teachers and doctors out of business – that’s a bit too Chicken Little for me).

However, it wasn’t that long ago that people scoffed at the idea that a computer would someday be able to beat the top Grand Masters at Chess.  That day, as we all know, has passed. Today the computer never loses – even to the best GM.  To assume that AI won’t someday be able to excel in other fields just as it has done with Chess is naive.  It’s simply a matter of time.  Maybe not for several more years or even in my lifetime, but eventually it’s going to happen.  There’s just too much computing power, demand and data driving ChatGPT  for it to not keep getting better. Just a matter of time.

I dreamt that I dwelt in Marble Halls.
With vassals and serfs at my side
And of all who assembled within those walls
That I was the hope and the pride.
I had riches too great to count, could boast of a high ancestral name,
But I also dreamt, which pleased me most,
That you loved me still the same.
— James Joyce